We were introduced to Doyle and Whitley by our architects Ercle as a recommended preferred partner by the Fell Partnership who are the UK suppliers of the Nudura build system. Five building companies were invited to tender initially, then reduced to just two. We visited their recent builds and met the principals. Both had created beautiful homes for their clients but we went with D and W as they had good experience with Nudura and we immediately felt a rapport with Tom Whitley.

What a fortunate choice. From our very first meeting we felt that we were in good hands. Initial quotes were too high for us but Tom said that if we went the cost plus route there were savings to be made. And so it proved – at the end of the day we have our ideal home, tailor-made to suit.

Communication was excellent and we were closely involved at every stage. Where there were choices to be made then Tom would spell out the pros and cons in detail. He and his team were always totally on top of every aspect and so well organised. Once on site, all went like clockwork, at what felt like incredible speed. Every member of said team and all of the sub contractors were very professional, obviously very competent and very involved. A bonus was that, to a man, they were so courteous, hard working, friendly, and helpful.

Any problems that arose were addressed speedily and efficiently. All the team were very involved in the project and rightly, proud of their contribution.

This all resulted in the whole project becoming a very exciting and enjoyable process.

As a footnote, coronavirus lockdown struck just a few weeks before our moving in date. This could have been disastrous, but after the initial freeze, Tom managed to organise the team to work safely on site alone, one trade, and one man at a time, resulting in just a months delay, with hard landscaping being completed after we were installed.

We are thrilled with our home, which in reality, exceeded our highest hopes and have no hesitation in recommending Doyle and Whitley wholeheartedly. 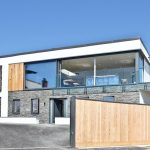